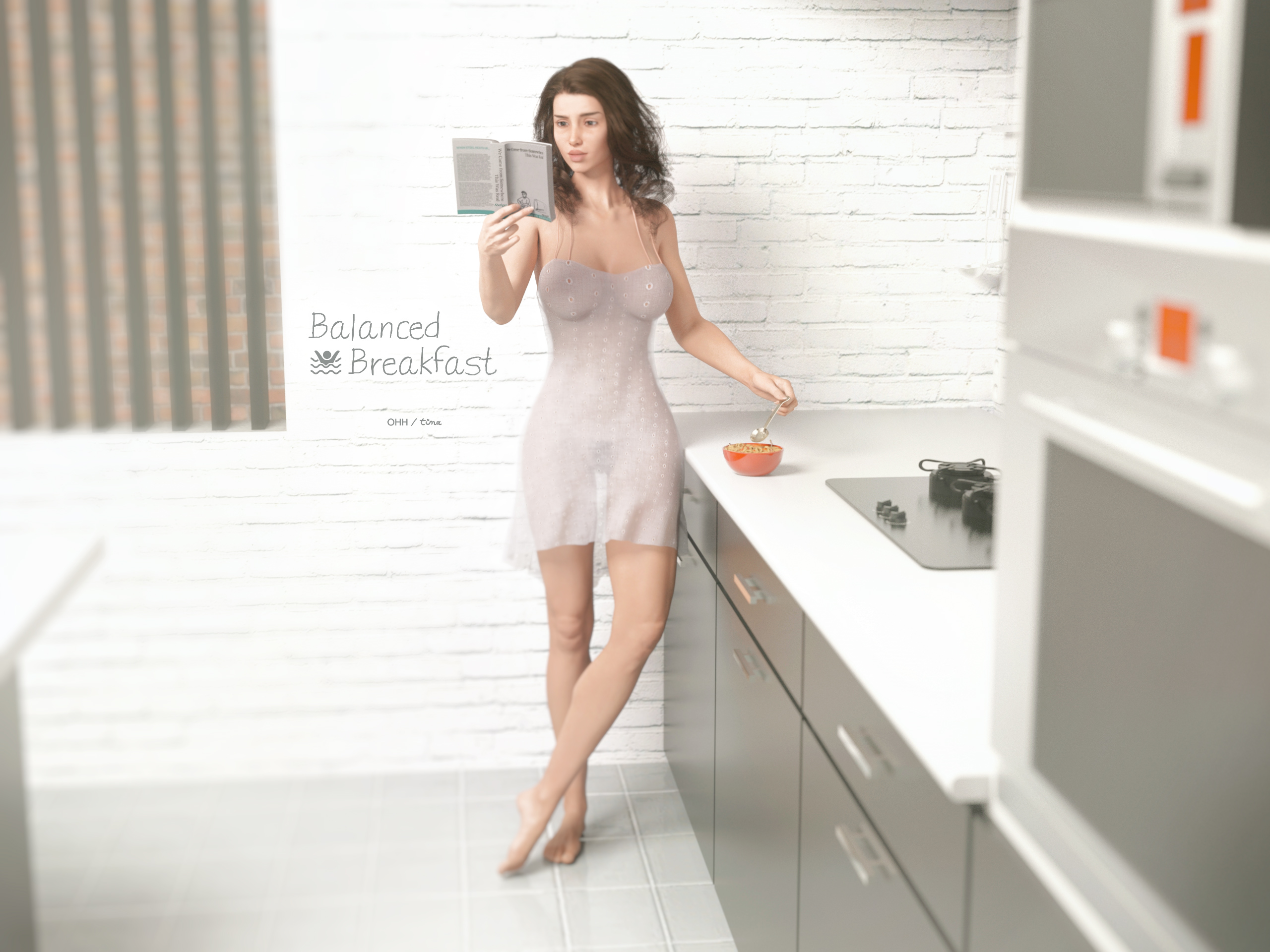 It’s a quiet day, and this book’s real good!
I just… It’s touching how they manage to put so much heart into these stories, thinking they’ll never get to experience the real thing…

We knew.
Each one of us.
From the moment we were selected by her. For whatever reason she chose us.

A glance on the street.
Talking too loud on the train.
A figure she particularly liked.
For whatever reason she took us, we knew it would end up like this. 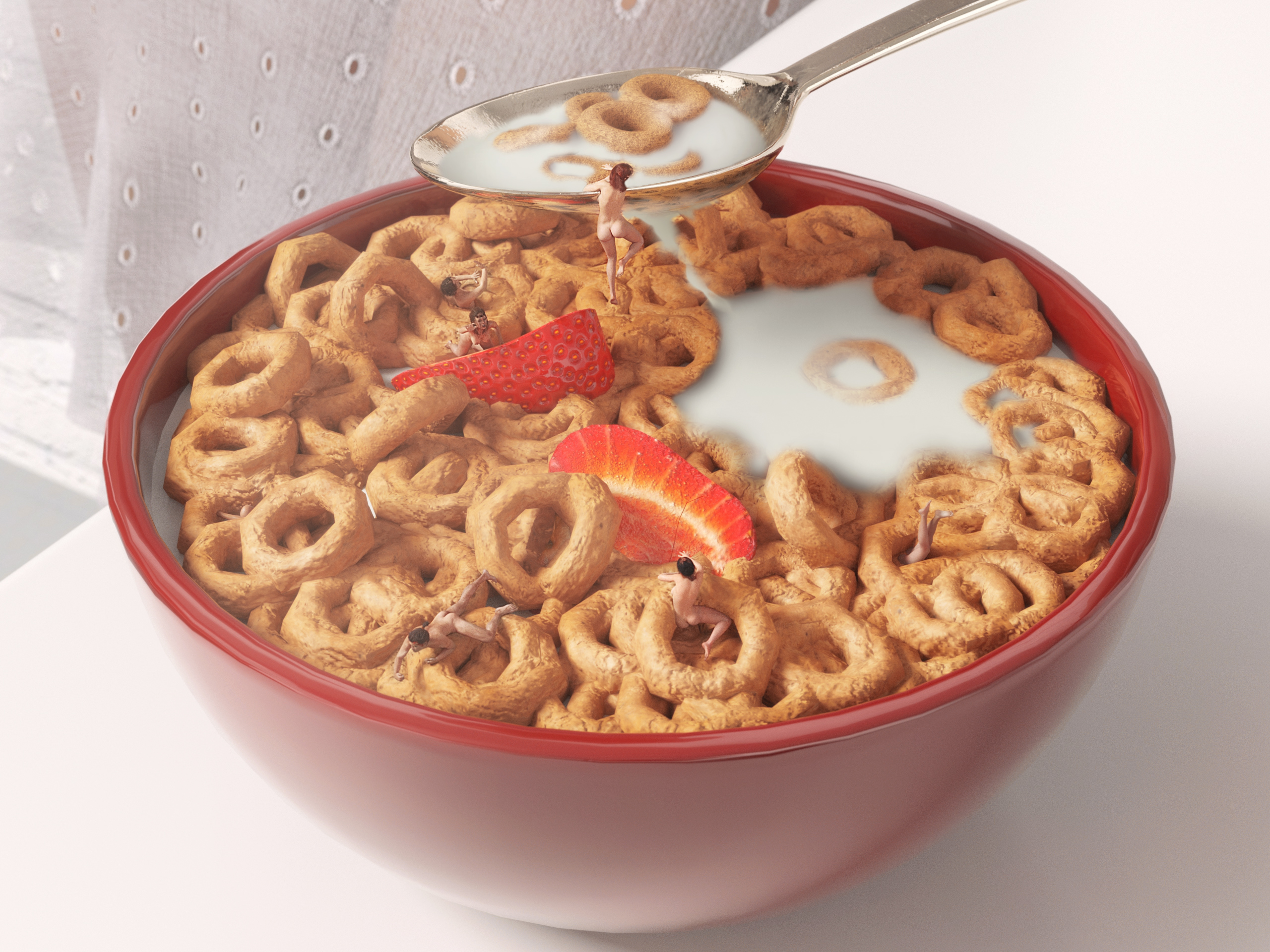 Oh! I should pay a visit to this writer… maybe today.
He would be soooo surprised!

We were placed into a container; sealed inside and placed in a cupboard alongside other non-perishable produce; Pasta, rice, biscuits and chocolate. These were now our peers. Sealed away in darkness to contemplate our fate.

And contemplate we did.
All night.
Nobody spoke.
Cried and whimpered, yes but no one spoke.
The next morning she came for us.

She hummed as she placed our container beside a towering box of cereal. She poured it first, the sound of the cereal hitting the bowl like the ringing of hundreds of bells tolling for us.

Still humming she poured the milk and added strawberries.
Then one by one we were selected by her once more and deftly dropped into the bowl of dried cereal and cold milk.
For her we weren’t breakfast. We were just garnish for her meal. Adding insult to injury she picked up a book and started to read; idly plunging the spoon into the bowl and whisking two of us off without so much as a glance. 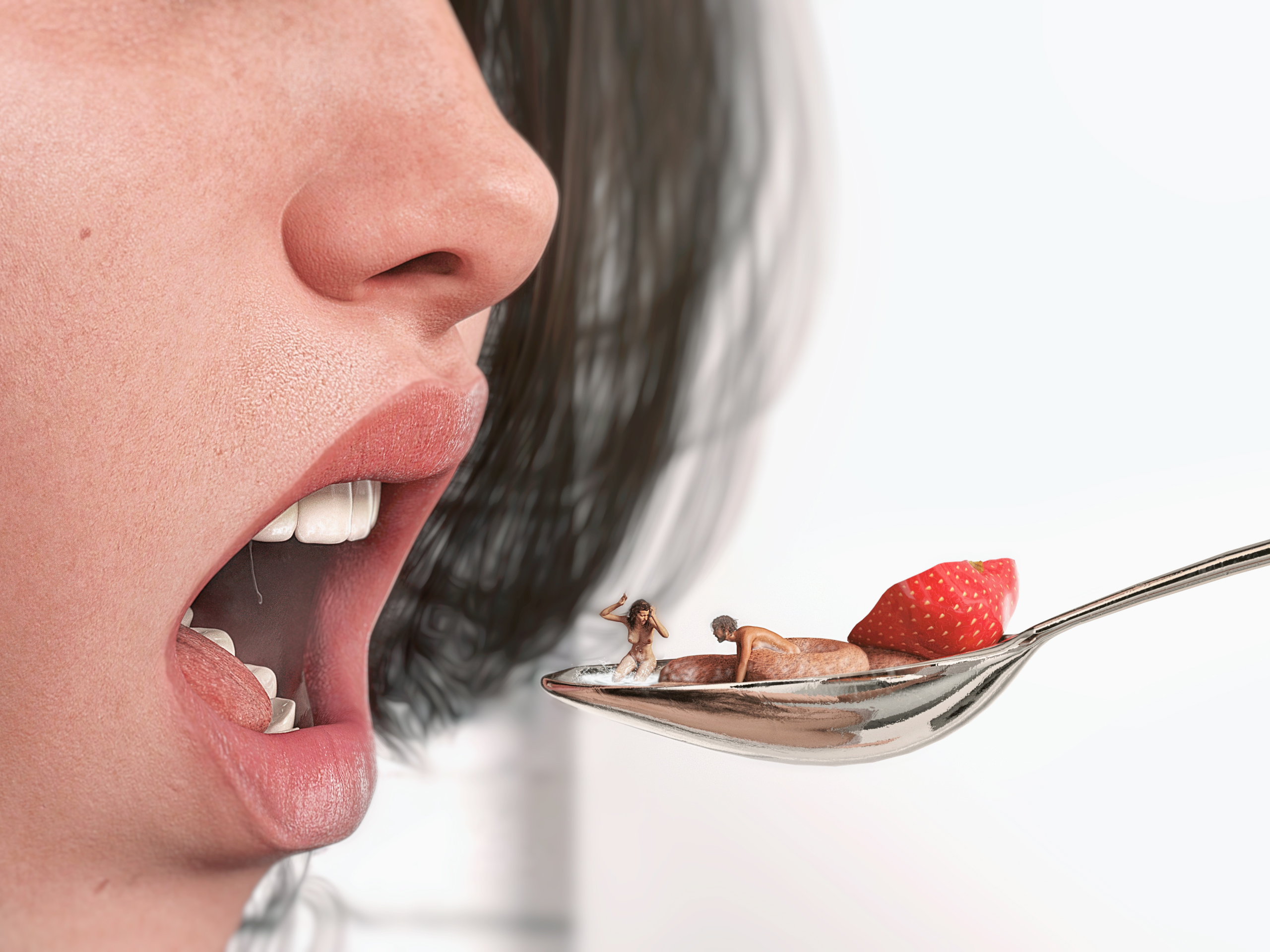 She kept her eyes on her book, the corners of her lips occasionally twitching as she read something she particularly enjoyed.

She paid no heed to the two souls on her spoon. Both were screaming and pleading with her, desperate to cling to their lives but she carried on as if they weren’t even there.

Her deep pink lips parted revealing a row of intimidating white teeth almost as large as us and a deep black abyss at the back of her throat that we would all soon meet. One way or another.

She guided the spoon inside and sealed her lips shut, muffling the screams of the two souls trapped within. Gracefully the spoon slid out and she started to chew. Cereal and milk and flesh being made one in her mouth. 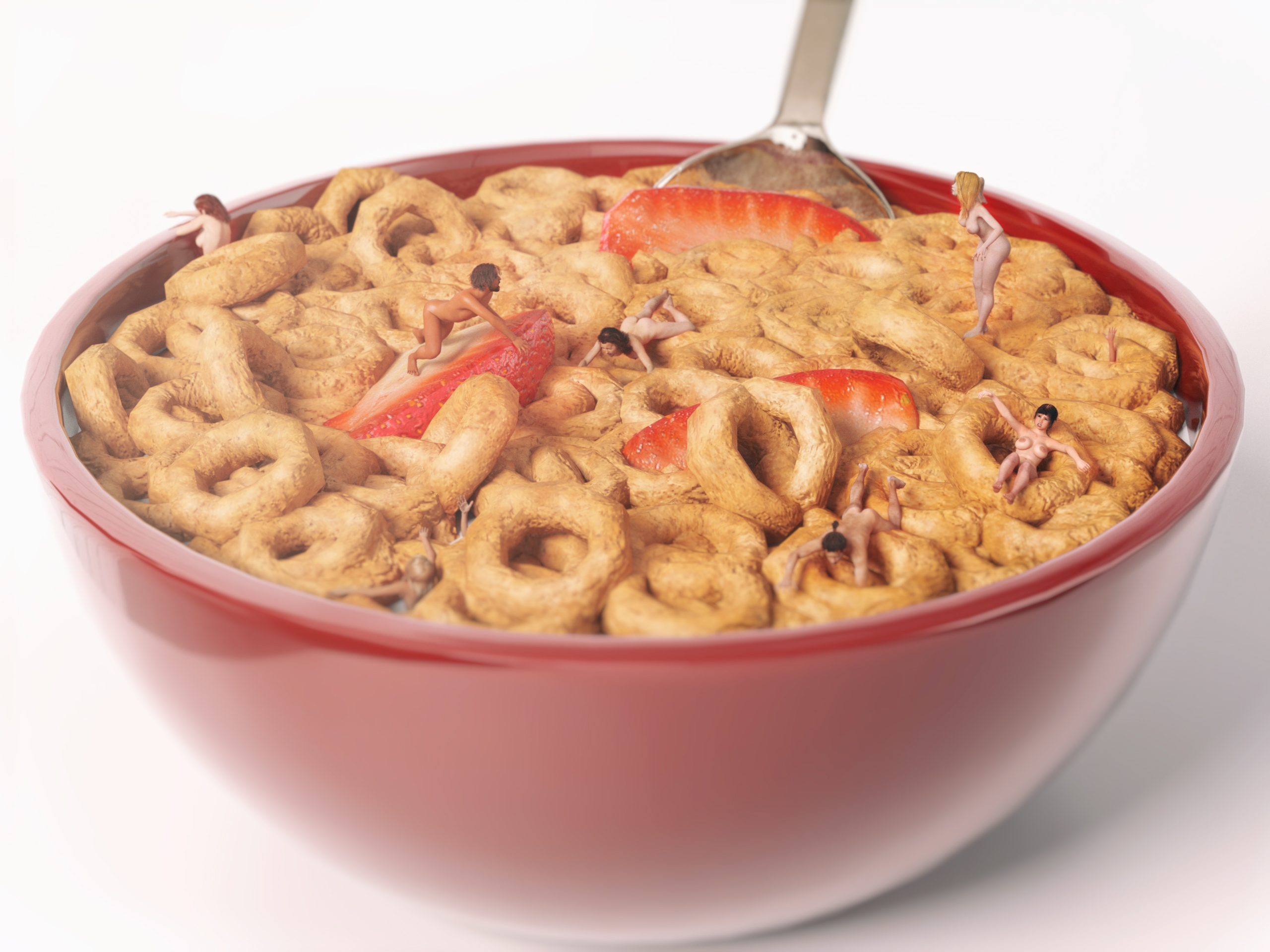 Thinking of it… I wonder how these mortals would feel, were I to make it real. The big ones and the small ones. What would happen if I were to make it an admitted fact?
They’d be afraid at first… oh yes they would!

For a moment we could only watch what was happening far above.
The rhythmic motion of her jaw moving up and down as she chewed.
The crunching sounds we hoped was just cereal.
But only for a moment. Then there was no more watching.

Only panicking.
And screaming.
And doing everything possible to get away from the spoon. 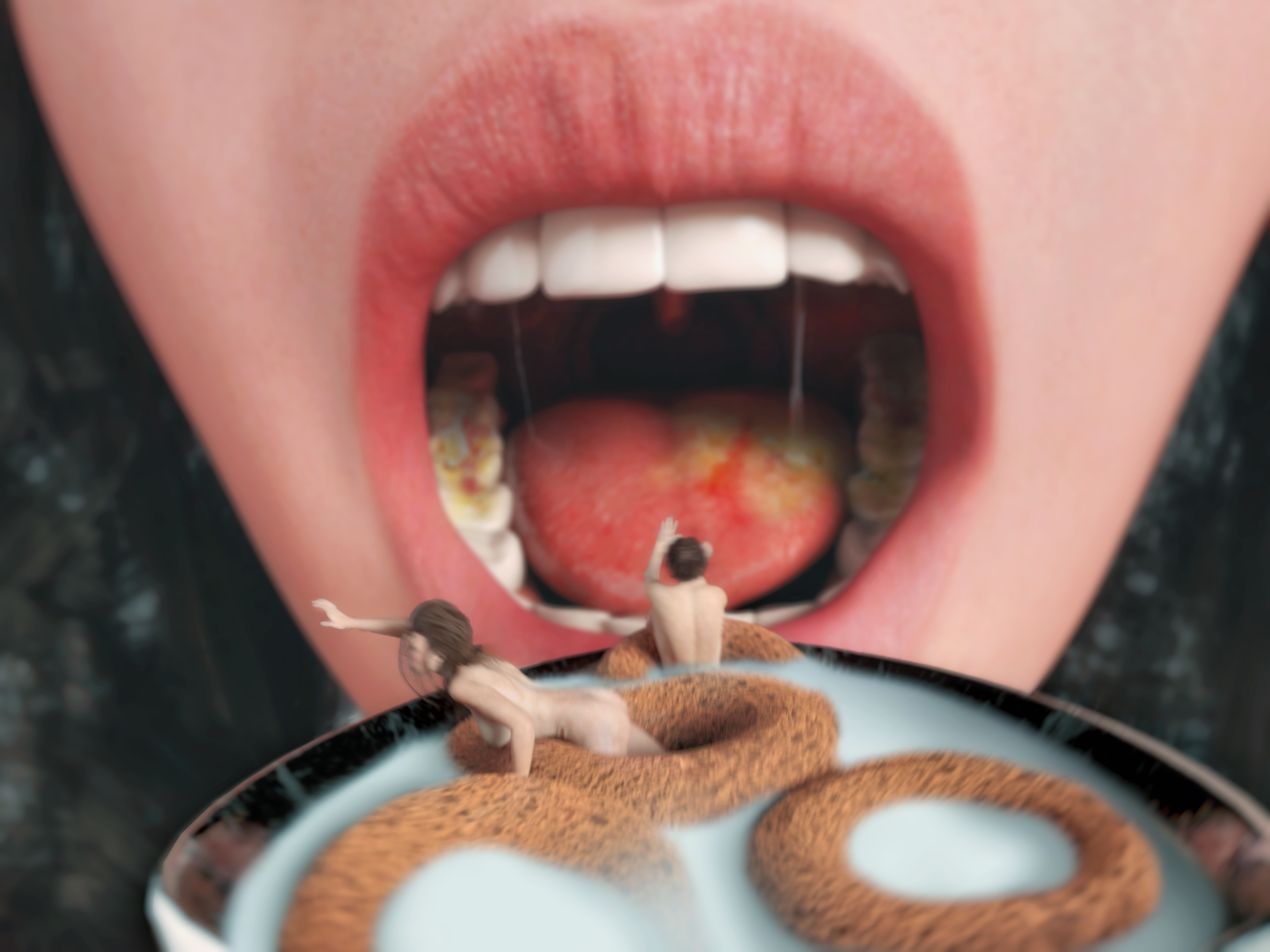 … then… maybe they’d accept it. In this story it says they would.
Just accept the fact of dominance, of constant threaten and seizure.
Hmm… maybe today?

Still she read, not attempting to catch us or toy with us.
She knew it was inevitable. Our struggling would mean nothing.
Eventually we would all find ourselves on that spoon making the journey upwards.

I envied the two who had been taken first.
It was easiest for them.
They didn’t have to listen to the screams or experience the repeated terror
of her spoon diving into the cold milk, dragging you under in its wake pulling
you into the ice cold liquid.
Or bear witness to the cacophony of horrors from those who had gone before… 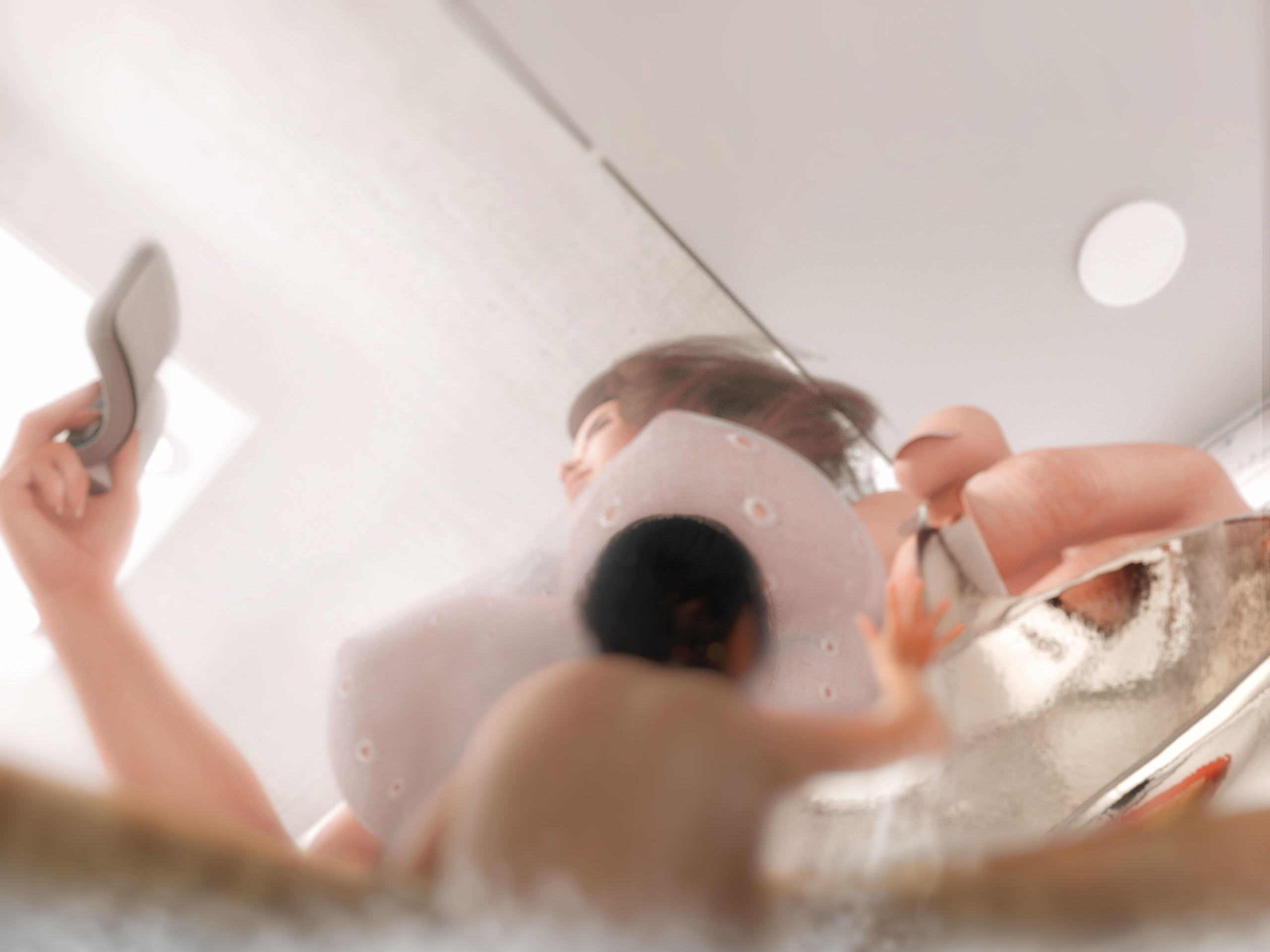 Look at that! Just when I think of it, the story express the very same idea. How apt.
How perfectly apt. What your story doesn’t say, little writer, is that making it real
would destroy the fantasy alltogether.
I’d enjoy that.

She simply carried on with her breakfast, enjoying her book.
She didn’t revel in the panic below or take joy from our screams.
She didn’t taunt us or goad us.
She didn’t even acknowledge us.
But why would she?

We were merely food for her.
Part of a balanced breakfast.

The most important meal of the day. 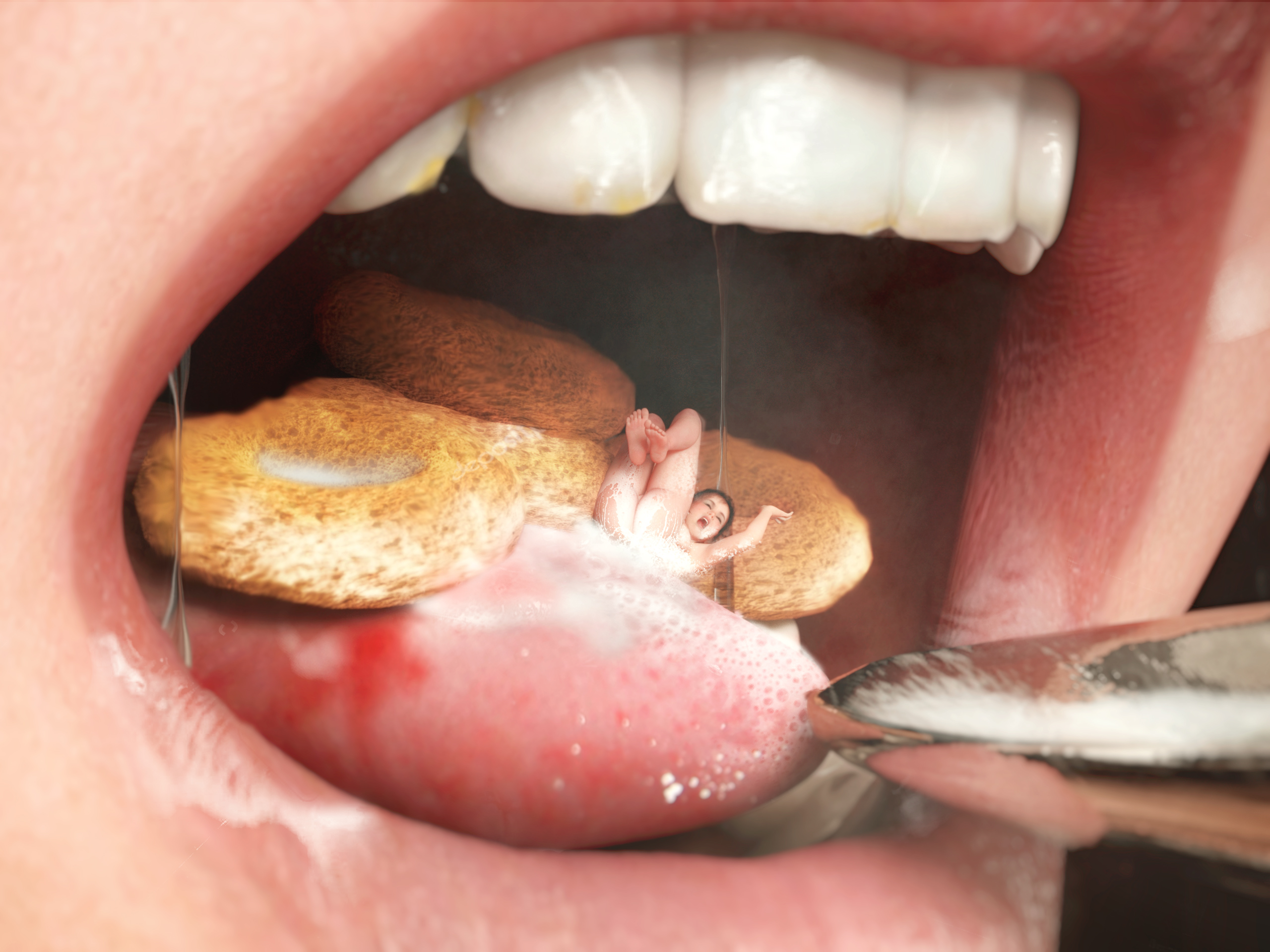 Oh yes I’d enjoy that, just like this tasty one about to… Hmm… there.
…
All crunchy and sweet.
So hmm… the fantasy…

Up went another one.

This one didn’t even fight it. Her heart was no longer in it.
The spoon went under little legs and lifted her right up out
of the bowl, whisked off into the sky, never to be seen again. 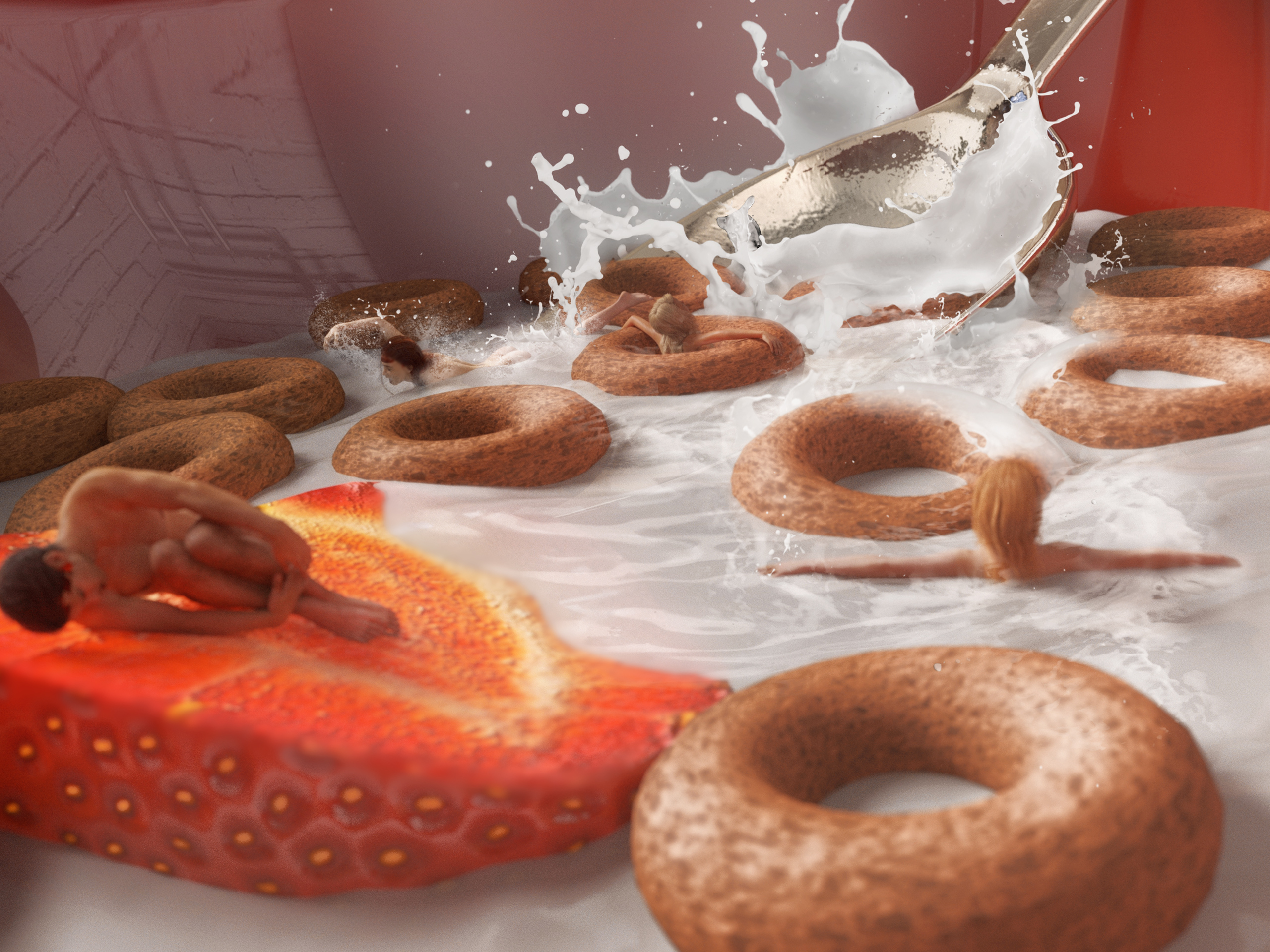 There wasn’t much left now. The level of the milk was approaching the bottom of the bowl with small islands of cereal floating on its surface rather than one huddled mass. Some continued to fight and struggle, but others followed the example of the one who went before and let the spoon decide their fate.

Once more it splashed down taking two more with it. 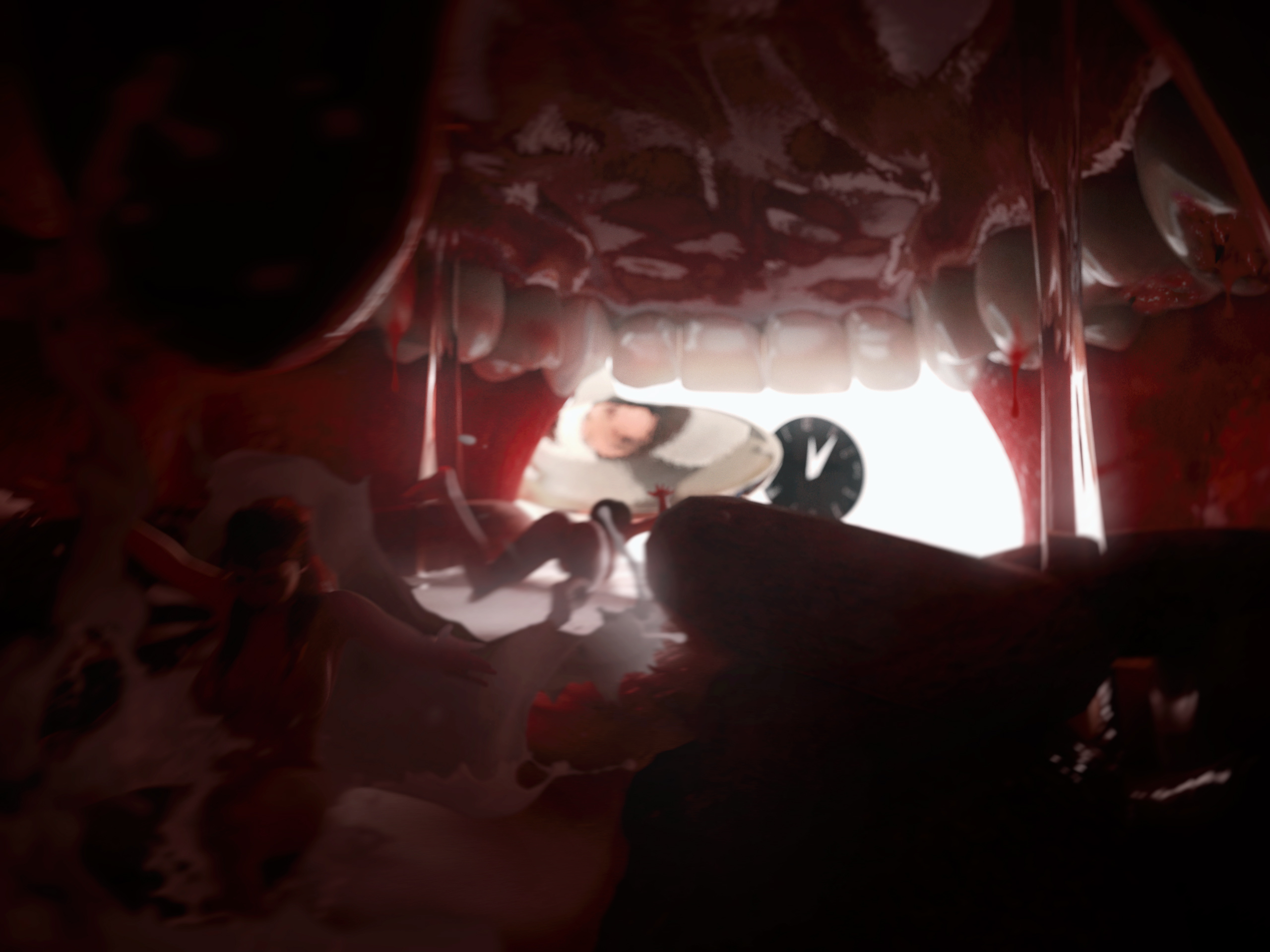 We must have all asked ourselves which fate would be worse…

To be chewed; smashed between those white pillars in her mouth until nothing but a fine paste.

Or swallowed whole; poured into the blackness to live out our last moments in stinking darkness as she slowly broke us down, bit by bit. 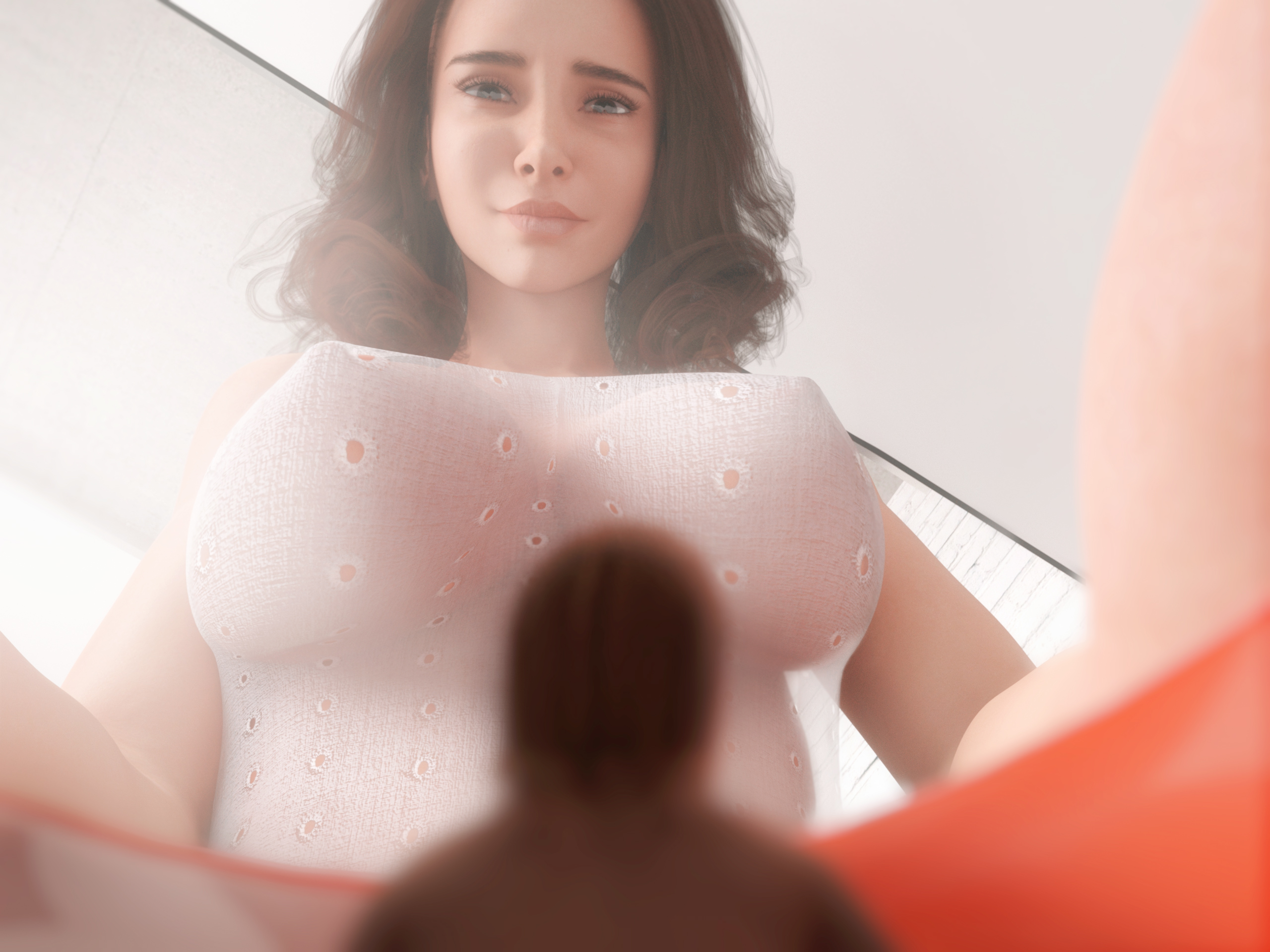 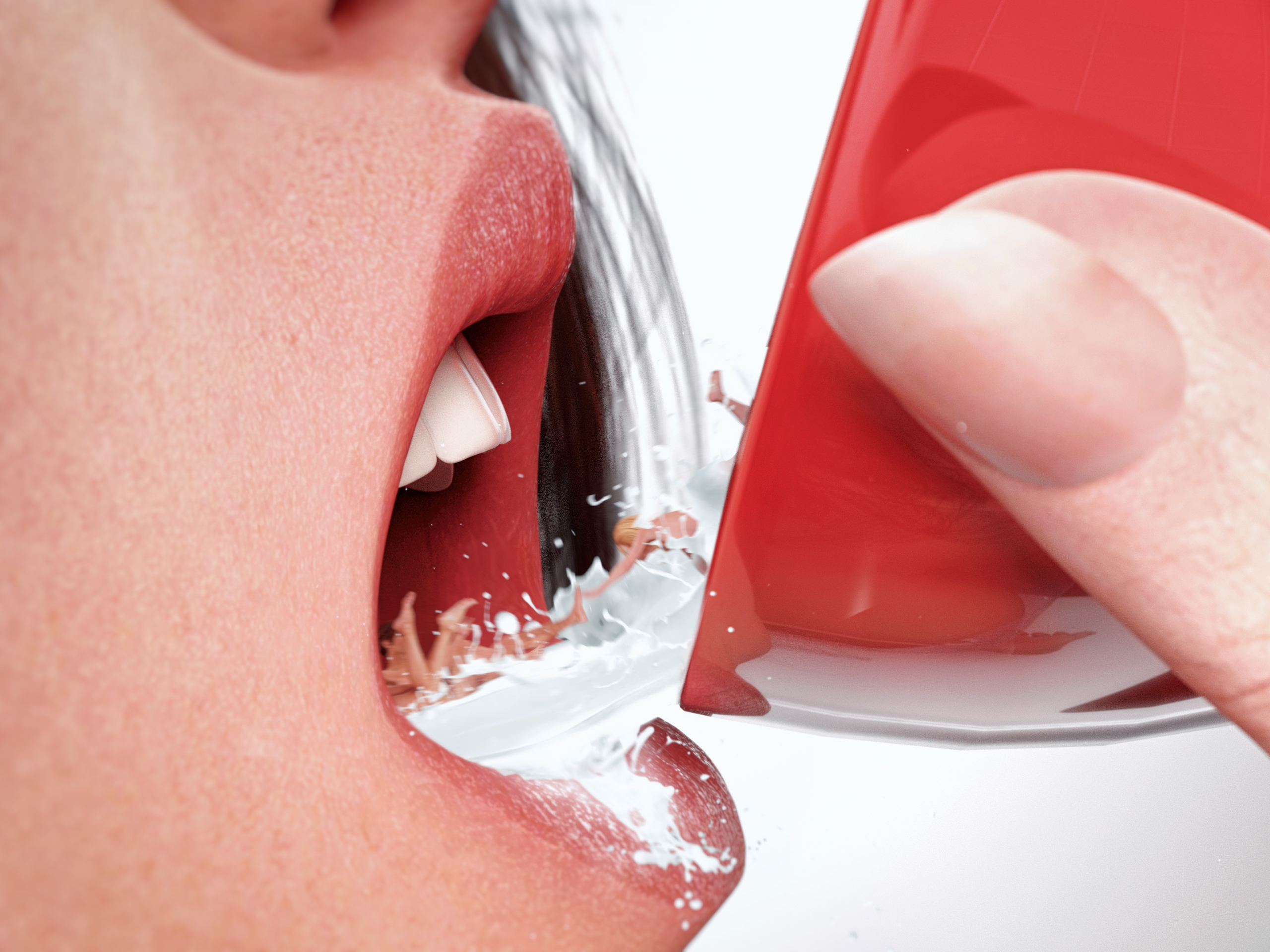 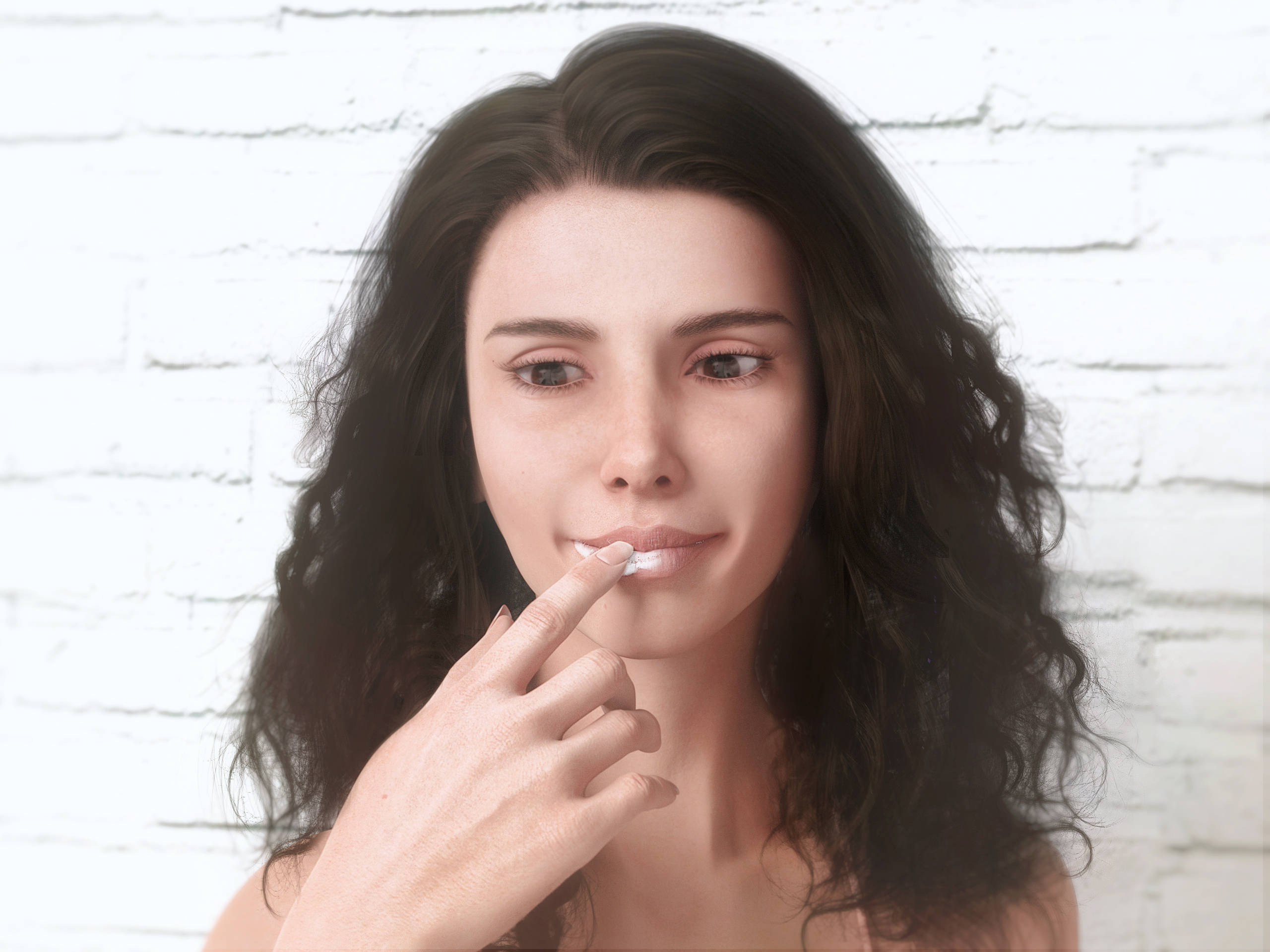