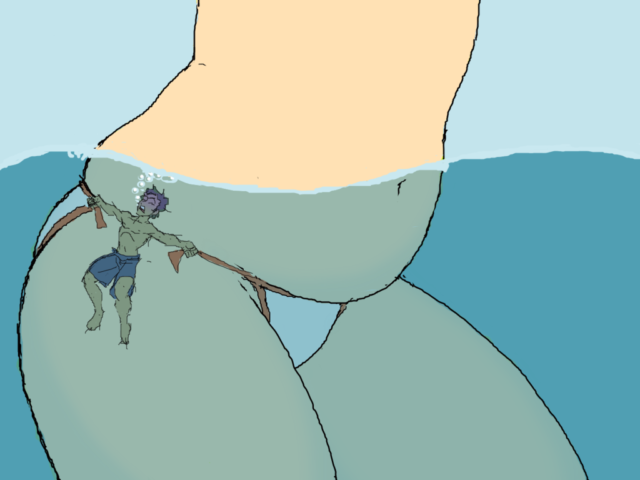 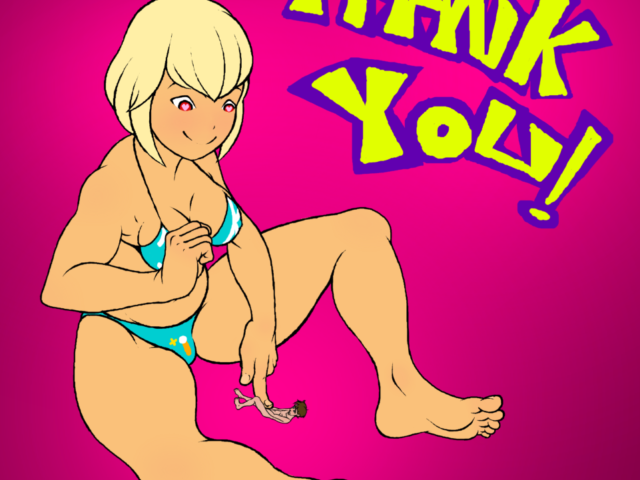 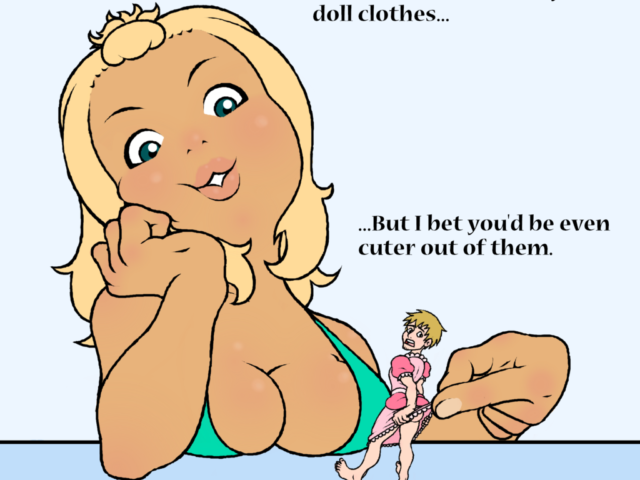 The wild TornadoTitan may be found on tumblr, deviantart, twitter… he’s easily recognized from his passion to draw very unusual and tricky angles, dominant, sweet situations and oppressive butts. Diversity is the word.

By the way. This is TornadoTitan’s first story and it’s good. Very good : 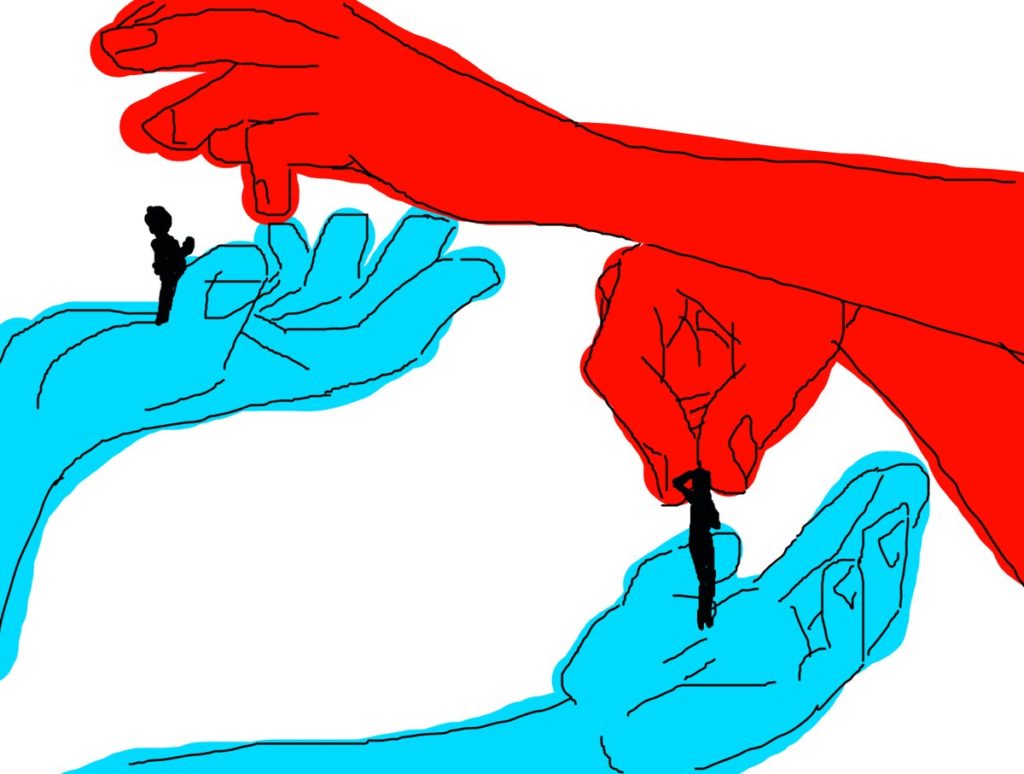 “And Trish: Please take good care of him.”

Trish rolled her eyes and waved her free hand in Amanda’s face. “He’ll be fine. I didn’t tell you how to treat Russell, did I?”

Amanda felt the miniature guy in between her cupped hands. She didn’t like trapping him in there, but all his squirming had made her worry he might fall. It was already apparent that Trevor’s relaxed nature was not universal to tinies.

Trevor responded by simply cocking his head, as he sat on the bed in his best-fitting doll clothes. After a few moments of Trish’s glare harshening, he spoke:

The remainder of his statement was absorbed by a mass of soft flesh, and weight unlike any he had ever experienced now pressed him into the bed. Although it had been too fast, and was now too dark, to see what had pinned him on his back, he could feel the flannel fabric of Trish’s pajama bottoms.

“Did I say you could talk?” Her voice tumbled her body, and his by extension.

“I’m not going to say it again.” She leaned forward slightly, and Trevor could now see perfectly well the sheer magnitude of her backside. While he could still feel it resting on top on him, the pressure had lessened enough for his arms and legs to move once more.

“I’m going to count to ten, then I’m going to stand up. If you’re still dressed when I see you, I’m gonna jump and drop back down.”

Trish felt an explosion of movement under her butt.

The sensation was incredible. This tiny had a lot more strength than hers, but even that wasn’t enough to even generate a tickle. No, what made this special was the fear.

Trish had gotten used to this game with her own tiny, but as a consequence so had he. This new plaything was experiencing it all for the first time, and told her as much with his vigorous struggles.

Of course, she would never actually kill him – Finding a replacement that could fool Amanda would cut into her precious leisure time. But she would also never rob herself of his fear that she might.

She had forgotten how lively they could be. Thoughts formed of how to get her own boy to live up to this new standard.

Trish saw an opportunity, and leaned back. The struggles underneath her cheeks briefly became more intense, before ceasing entirely.

Very subtle vibrations tickled her rump, making her blush. He must have been trying to scream.

Feeling generous, she once again shifted her weight forward to give him some leeway. The wriggling resumed, but with far greater urgency than before.

These were the struggles one could only get from the fear of imminent death. Trish could make out every adrenaline-soaked motion.

She didn’t want to get up. She wanted this moment to last forever. But she was smart enough to know that the stick needed a carrot.

The colossal rear rose into the sky. Though it had taken him until the last second, Trevor had finally managed to undress, and for this the moon overhead had shown him mercy.

Russell was a common sight for her, but taking a moment to examine him up close made her determined to look much longer than a moment.

Even for a tiny, Russell was astoundingly small. Trevor was almost exactly as tall as her pinky, but this boy was a full phalange shorter. On the rare occasions he stood upright, anyway.

He was also far skinnier than Trevor was, and Amanda awed at him ravenously tearing into a tiny piece of muffin she’d given him. Eager to dispense affection, she reached to pat his head with one finger.

At the moment of contact, Russell dropped his meal and cowered down, covering his head with both arms.

“Poor thing,” she said, withdrawing her hand, “You miss your owner, don’t you?”

She’d finally stopped to get a good look at Amanda’s boy toy. And what did she see?

A nice jawline. Defined muscles. Silky hair. Everything her tiny didn’t have.

On top of that, he wasn’t even broken in yet. When she made threats to Russell, he just accepted them. And when she offered kindness, he wouldn’t fall for it.

“You know, it was pretty impressive how quickly you got those clothes off. I think you deserve a reward.”

Trevor perked up. Internally, he chastised himself for having doubts about his owner’s best friend.

“What sort of reward?”

Trish’s eyes narrowed, and she licked her lips. “How would you feel about a kiss?”

Russell tensed up at the question. What game was she playing? He pondered if he had misheard the arrangement this young woman had with his owner, and that he may in fact be the first tiny she’s ever played with. It seemed the only explanation why she thought he would fall for this.

Amanda’s smile fell into a frown. The hope for a day full of affectionate play was sinking fast with the weight of her new friend’s mood. The tiny suspicion that Russell would be pining for Trish’s loving embrace had grown into an enormous problem.

Heat tried to escape his body, only to be met with heat on all sides. Adjusting position was impossible – His strength was no match for the slightest of her efforts, and his limbs sunk harmlessly into the soft masses that caressed every inch of his skin.

“Like you asked, Amanda: I took good care of him.”

Amanda pried Trevor from Trish’s grip, and enveloped his face in a kiss she held for several seconds. “Is she telling the truth? Did you have fun?”

In Amanda’s huge sparkling eyes, Trevor could see Trish’s reflection. He turned to the original, and her eyes reached into the back of his mind. He turned back to his owner.

“So much!” said Trevor, though a painfully wide grin on a ghost white face.

Amanda cheered, and passed Russell back to Trish – A pass that was delayed a bit when Russell clung to Amanda’s fingers. Had his owner been anyone but Trish, Amanda was certain that last tug might have dislocated something.

As his owner left with him, Russell left with something new, and began to cry.